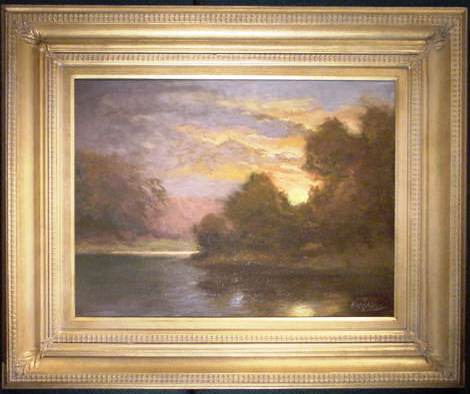 Arthur Heickell was a Finnish artist who painted landscapes and nature scenes, churches, altarpieces, and portraits. He is considered to be an autodidact, but he studied at the Finnish Art Society drawing school where he graduated 1904. He also studied in , , and . During a brief period in , he signed with the pseudonym “E. Johansson”.

His finest work represents the period known as “Tonalism” in the history of art.  Tonalism was an artistic style that emerged in the 1880s when artists began to paint landscape forms with an overall tone of colored atmosphere or mist.  They used heavily ground canvas, and many layers of paint to achieve these effects.

Between 1880 and 1915, dark, neutral hues such as gray, brown or blue, often dominated compositions by artists associated with the style. During the late 1890s, American art critics began to use the term “tonal” to describe these works. Two of the leading associated painters were George Inness and James McNeill Whistler.

Tonalism is sometimes used to describe American landscapes derived from the French Barbizon style, which emphasized mood and shadow.